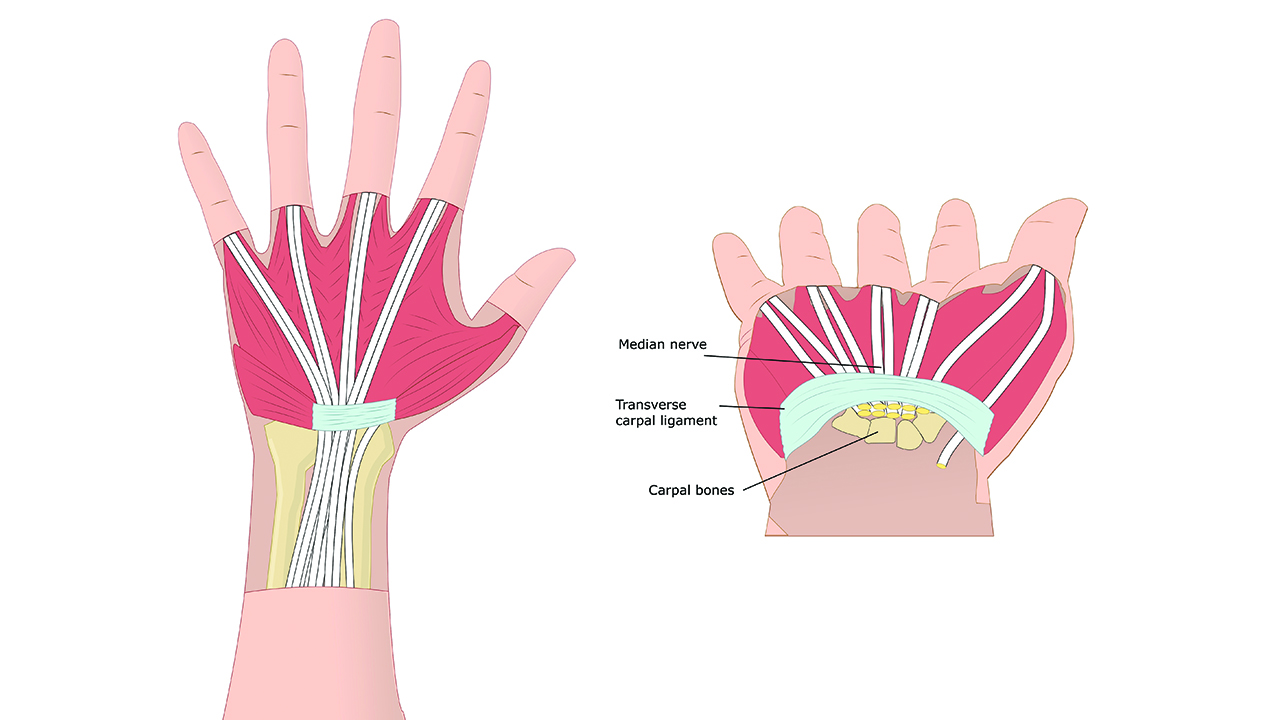 The carpal tunnel syndrome (TCPs) is one of the most frequent diseases of the hand, with an incidence of 0.1 to 10% in the general population. It affects mostly middle-aged women at the beginning of menopause. It is the set of symptoms and clinical manifestations due to the pressure of the median nerve as it passes from carpal tunnel.

Predisposing factors for the development of TCPs are: gender (female), obesity, pregnancy, advanced age, smoking, alcohol consumption, repetitive wrist movements found in occupations such as hairdressers, dentists, manual and diseases such as diabetes mellitus, hypothyroidism, amyloidosis and rheumatoid arthritis. Furthermore the TCPs often occurs after fractures or dislocations of the distal radius and carpal bones.

The mechanism of onset and progressive deterioration of the syndrome based on the report of the wrist to repeated cyclic stress or vibration in subjects with normal wrist anatomy, such as cyclists, tennis players and throwers or being invasive structures eg or ganglion cyst pushing the median nerve

The carpal tunnel is an adamant osteoinodi structure, a kind of “tunnel”. Its boundaries are formed by the following anatomical structures: The outside wall of the cusp of the trough and the trapezium bone, the medial wall of the hook of the hook-and pisoeides bone, the top of the transverse link of wrist and the ground by the central verse of the fruit.

In carpal tunnel passing the median nerve and flexor tendons 9 muscle daktylon.To median nerve arises from the A6 radical cervical spinal cord and is formed as part of the brachial plexus. Treading on the medial surface of the arm and the front of the forearm before passing through the carpal tunnel to reach by hand.

The median nerve in the hand provides sensation to the palmar surface of the thumb, index, middle and ring finger ½ and at the top of the fingers contribute to very significant sense of touch. (The first three fingers – thumb, index, middle – not without reason considered the “third eye” us). Moreover neurosis gives the majority of “small” muscles of the thenar thumb.

Main symptoms of TCPs are numbness in 3 ½ fingers of the distribution of the median nerve, wrist pain and paresthesias reflecting to the fingers or distal forearm and elbow centrally. Rarely pain reflects up to the shoulder. It is usually more intense during the night and early morning and awakens the patient. Refers transient improvement and remission of symptoms by lifting member and exercise. There are periods of remissions and exacerbations initially, but later both pain and numbness are permanently. The muscle weakness is progressive and even in neglected conditions limits the patient from daily – mostly thin – activities such as chemise clasp, hold keys, glass handling, etc.

With time the clinically manifest may be atrophy thenar, particularly in advanced cases. Impaired also check the sensation in the area of ​​distribution of the median nerve as described above.

Diagnosis of TCPs are mostly clinic, by means of various tests such as Phalen test, the test and Tinel Durkan’s test. X-ray imaging is not necessary, while electrophysiological control with Electromyography and Nefrografima can confirm the condition. In a significant proportion electromyography does not confirm the clinical picture which as said is the most important.

Treatment of TCPs have different levels. In the early stages can be used nocturnal splint immobilization of the wrist, modification of activities and anti-inflammatory treatment. As a second line of impact can take place within the steroid injection tube (cortisone). This gives 80% transient improvement, while that percentage, 22% will remain free of symptoms for 1 year.

The most effective option is surgery, in which is drilled a crosslink wrist and decompresses the median nerve. In most cases there is immediate relief from pain and gradual decline of numbness. The retention force between thumb and index fully recover in six weeks, while the grip strength reaches 100% after 12 weeks. The sensory disturbances may even improve after six months, but the restoration is complete. Unlike in neglected cases with installed muscular atrophy, mobility and strength never fully restored.

Surgical treatment may be either open or endoscopic recent years. The open method is more common and is the method of choice for neglected cases, relapses or incomplete primary openings. The endoscopic method is more specific, require expertise and expensive equipment. It offers faster recovery and return to daily activities and work as it leaves intact the skin and subcutaneous tissue in the wrist area that serves as a point of support and lobbying in several drastiriotites.I this faster return to work and daily activity offsets the cost of surgery. Yet several studies have concluded that the long-term effects are similar in both methods.

Indicate finally that TCPs must be distinguished from diseases that cause similar symptoms. Thus prior to treatment, requires the differential between TCPs and Cervical radiculitis (wherein A6 is pushed by the root) and between TCPs and pronator syndrome (wherein the rib means is pressed in the elbow area).

Self-examination of the female breast